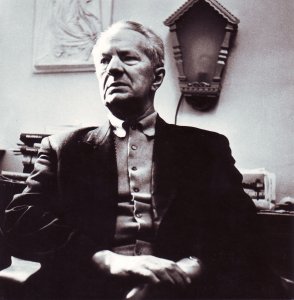 One of the noblest ideas of Balys Dvarionas in his final years was to pay a visit to each one of the children’s music schools in Lithuania. At that time, there were well over a hundred of them. He embarked on the task and visited many schools, together with other musicians, giving piano concerts. Sadly, illness prevented him from carrying out the work to the end.

The idea to honour him by founding a music competition in his name came up after his death, during the commemoration of the 70th anniversary of his birth. The people behind the idea

were the composer and pianist Julius Andrejevas and the pianist and music teacher Aleksandras Jurgelionis, both of whom were former pupils of Balys and Aldona Dvarionas. At that time, they were on the staff of the piano section of the B. Dvarionas Seven-Year Music School, and their enthusiasm was infectious enough to win over the school’s management, which, to use the jargon of the period, ‘broke through’ all the ideological barriers and prohibitions.

It was a fresh spring morning in 1974 when Estrellita, sung in Beatričė Grincevičiūtė’s silvery voice, announced the opening of the 1st Balys Dvarionas National Young Pianists Competition. The event was a great success. The jury was led by Tatyana Nikolayeva, the world-famous pianist. Hundreds of talented children were discovered in various Lithuanian towns and villages. Over a hundred beginners and advanced pianists came to Vilnius to play in the final round, and sixteen of them were awarded the title of laureate. The results of the event far exceeded the

organisers’ expectations: the enthusiasm for the competition was obvious. In a way, it was like a continuation of Dvarionas’ original idea, except that now it was not the composer but the children who were remembering the great musician and paying their respects to him by performing his work.

Soon it was decided that instead of limiting the competition to pianists, violinists should also be invited to participate in it. This was especially meaningful, since Dvarionas’ Concerto for violin in B minor had become a landmark in Lithuanian music, and contributed significantly to the fostering of the national cultural identity. Since 1986, when the 6th competition was held, it has included all of the string specialities, including viola, cello and double bass. But the core of the musical programme remains works for piano and violin, instruments for which the composer’s talent found its best expression.

The competition did not remain only a national event for long. Soon musicians from other republics of the former Soviet Union, Georgia, Armenia, Uzbekistan and Kirghizia, and of course from Latvia, Belarus and Estonia, expressed the desire to participate in it. In less then ten years, the competition achieved all-union recognition, and became de facto international. Officially though, international status was only granted in 1989. The newly founded Lithuanian Society of Musicians organised the 1st International Balys Dvarionas Competition for Young Pianists and Violinists. Since that memorable year, despite all the vicissitudes in Lithuanian life, and sometimes almost critical situations, the competition has never failed to take place as intended. The state has managed to find the resources to keep this noble tradition alive, even though sometimes with very limited means.

In fact, the first competitions had very little support other than enthusiasm. It is with deep respect that I would like to express my gratitude to the members of the jury, who worked without any reimbursement. With the same sentiment, I recall all the participants, the parents and the teachers who took part in the competition, led by their idealistic aspirations to foster new talent, to promote artistic education, and to spread the musical legacy of Balys Dvarionas. Can we forget the idea by the late graphic artist Rimtautas Gibavičius to offer his artwork as prizes to the winners of the competition? Vytautas Kalinauskas, Mikalojus Vilutis, Danutė Plikionytė-Bružienė and Elvyra Katalina Kriaučiūnaitė all continued the tradition by donating fine prints, and Jerzy Korzeniowsky and Bronius Uogintas donated paintings. The competition grew into something much larger than a musical event: a movement by artists stimulating creativity, with a past enriched by such initiatives, because it brings together not only musicians, but artists from other fields.

The musical programme of the competition reflects the range of Dvarionas’ values and preferences in his artistic activities: Baroque, and particularly J. S. Bach, a towering figure of the epoch, to whom he was willing to pay homage. Dvarionas was also famous for his interpretations of Viennese Classical composers. The great European Romantics, and the world of their passions, were close to his heart. And so was Lithuanian music. Since his first recital, he never stopped encouraging this music, including and beginning with the Lithuanians M. K. Čiurlionis and J. Gruodis.

Having wide experience of judging performers in various competitions (pianists, conductors and organists), Dvarionas did not like to award winners places. ‘Immediate musical performances should not be sorted into shelves, like things,’ he would say. ‘This one is higher, that one is lower; this one is first, that one comes after him.’ Therefore, the laureates in this competition are not ranked: all of them win. Only especially prominent talents win the Grand Prix.

With time, the structure of the competition has been refined, in order to reflect significant developments in levels of professionalism. From the 5th competition, the need emerged to

change and expand the existing age groups (from the original two to three). The grown level of performance has enabled the introduction of Round 3 for the senior group participants, where

contests perform already with symphony orchestra accompaniment. The high professional and artistic level of the competition and its firmly established transparent standards of adjudication have been recognized by EMCY, whose member we became in 2002.

The Dvarionas Competition is growing and developing, there are more participants representing different countries. It is difficult to track the hundreds of outstanding performers who took their first steps towards recognition at this event. The uninhibited spirit of playing music and the joy of meeting talented new people create an aura of the true artistry at the Balys Dvarionas Competition for Young Pianists and Violinists, and a blissful feeling of unity with music. This has always been and remains at the heart of this music festival, as its main aim and its most distinctive feature.